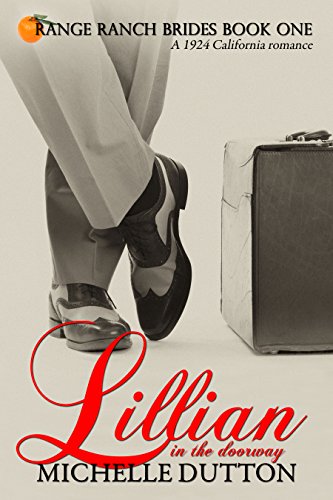 Lillian in the Doorway, by Michelle Knowlden

It was my pleasure to read one of Michelle Knowden’s numerous books, Lillian in the Doorway. Here’s her response to the question, “What inspired you to write this book?”

Years ago, a friend of mine introduced me to the orange groves of Orange County when we test-drove his brand-new Volkswagen Scirocco down Bastanchury Boulevard in Yorba Linda, California. We passed groves, packing houses, and Richard Nixon’s birthplace—a teeny house in the middle of nowhere. Decades later, Imoved to a place near an original orange ranch and a historical romance exploded in my imagination.

Lillian in the Doorway is a swift, well-nuanced story, a perfect read for momentary escape between household chores or our mornings of June gloom. Michelle’s thorough research of the era sparkles in dibs and dabs: she includes verbs vanquished from modern vernacular as well as period clothing, furniture, SoCal landmarks, manners, and cars. Lillian adores her friends’ depiction of her as ‘formidable’ and you will, too. You’ll want to know what life threshold awaits.

Michelle’s delightful book reminded me of a favorite series by Amy Stewart, in which strong, turn-of-the-twentieth-century single young females engage in detective escapades, too. Amy’s first book, Girl Waits with Gun, boasts 643 Amazon reviews and Michelle’s Lillian in the Doorway, deserves such a grand total. I urge you to purchase-read-and review Lillian in the Doorway and Michelle’s Abishag and Deluded Detective series, too.

Between 1992 and 2011, Michelle Knowlden published 14 stories with Alfred Hitchcock’s Mystery Magazine. The 1998 story “No, Thank You, John” was nominated for a Shamus award. Many of these stories have been included in anthologies and translated in multiple languages. She also published a science fiction story for the More Amazing Stories anthology published by Tor and another for Daily Science Fiction.

She has also written a 1920s romance under the name Michelle Dutton, and collaborated with Neal Shusterman on several YA Sci-Fi stories, including Dark Matter (An X-Files Novel) for HarperCollins under the name Easton Royce and Unstrung, an e-novella in Neal’s Unwind world published by Simon & Schuster.

After leaving an engineering career of many years, Michelle lives in California with her family and writes full-time. Check out Michelle’s Amazon Author Page!

Reviewer PJ Colando writes Americana fiction with preposterous plots and lively characters. She’s the author of the humorous Hashes and Bashes and Stashes. You can find out more about PJ at PJColando.com

2 thoughts on “Review of Lillian in the Doorway”

This site uses Akismet to reduce spam. Learn how your comment data is processed.